12 Hours In The Pit: A Conscious Crew Personal Narrative
Advertisement Working as a member of USC Events’ Conscious Crew is an experience like no other. Anyone who’s ever been a part of it can attest to the rigors and rewards of keeping their fellow ravers safe, and Paradiso 2014 was no exception. One of our intrepid team members took it upon himself to document the experience, and came back to us with a play-by-play of his busy day wearing the trademark orange shirt.

We can all agree that the Gorge Amphitheater is a magical place with breathtaking views and amazing acoustics, but walking into Paradiso before the gates opened on Friday had my heart racing for other reasons. Over the next 12 hours I volunteered with USC’s Conscious Crew, navigating through the crowd and spreading “The Message” through smiles and high fives. After a quick radio check with our team to start the day, my partner Megan Kight and I descended into an empty pit.

Standing against the lower wall as the crowd filed in, we watched faces light up and arms reach for the sky as fans reacted to finally reaching their destination: Their paradise. Unlike security guards and event staff, the Conscious Crew (CC) is made up of real ravers; while my partner practiced with her poi I took the opportunity to throw my hands up and bounce to the music. Before long, the bowl filled and we started roaming through the crowd enjoying the good vibes. After a few sets, walking our beat became increasingly difficult. We quickly realized that if they were dancing they were alright. Shifting our focus from the main stage towards the back wall revealed our future responsibility for the night. There sitting alone with his head in his hands was our first raver in distress. Cautiously approaching him, my partner rubbed his shoulder asking if he was okay. With his head still in his hands he shook his head and replied, “I’m just frying balls right now, I’m fine.” We both chuckled as my partner scratched his head letting him know we were there if he needed anything, wishing him a safe trip before moving on.

As the sun started to set, Dirty Dutch blasted through the speakers, working the crowd into a heated frenzy. It was more than a little interesting to be on the outside looking in at our scene, as Paradiso attendees stood wide-eyed and mesmerized by the visual effects of the jumbo LED screens. We watched on as the evening continued, ready to spring into action. Shortly after sunset while moving between groups of dancers, I was frantically tapped on the shoulder by a festival-goer exclaiming, “We need help!” Less than 10 feet behind us a young man had lost consciousness and was convulsing on the ground.

Without hesitation my partner and I assessed the scene and went to work on the seizing raver. With a loud and authoritative, “BACK UP!” I cleared everyone surrounding him and knelt down to place the palm of my hand underneath his head, preventing him from banging it against the ground. While letting his arms and legs naturally contract and relax due to abnormal electrical activity in his brain, I instructed Megan to go get our lead and bring him back (NOTE: I’m CPR certified and have military first aid training that qualified to me to lend aid before paramedics could arrive on the scene).

Long before the poor kid regained consciousness, our lead radioed in to command. Paramedics arrived at the scene just as his eyes snapped open, looking disoriented and confused as to why he was on the ground. Able to stand under his own weight, the paramedics led the young man to the medical tent and we went back to work scanning the crowd, happy to have helped.

In this article:Conscious Crew, Paradiso, The Message, USC Events
Up Next:

Paradiso 2014 Was A Massive Success Thanks To Conscious Crew

The Gloves Come Off: Why Rave Culture’s Iconic Art Form Is Disappearing 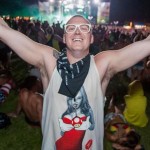