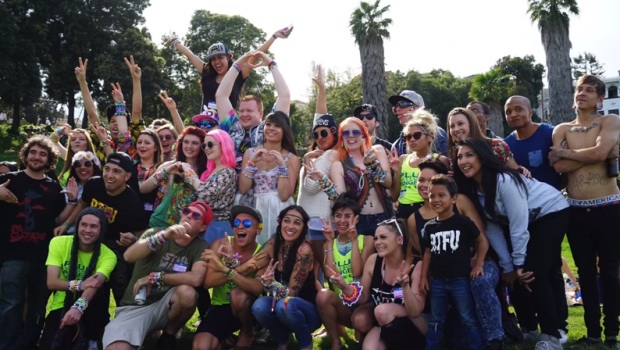 On Saturday, September 13th, ambassadors from cities across the United States will be hosting PLUR Warriors Kandi Picnics. While some cities have been hosting picnics since March 2014, it will be the first such event for Portland. The picnics provide an opportunity for people of all ages to come together and create kandi while also serving a philanthropic cause such as collecting canned goods for the local food bank, or school supplies for those in need.

Not only do we have Kandi Picnics but we also make an impact in our community. We don’t want to just be known just as ravers, kandikids or music lovers. We also want to give back to the community and shine a positive light into what we do. A major part of our picnic is collecting canned foods and gently used clothing for those less fortunate. New York has a large homeless population around the city and it’s good to know we are helping clothe and feed them.

To those involved, the picnics are a lot more than crafting kandi and donating food; it’s about creating a sense of belonging with like-minded people. For almost every ambassador we talked to, hosting and being a part of the PLUR Warriors, created by Lady Casa and Barbarica Apparel, was a calling.  Amalija DiGiorgio, an ambassador from the Tampa PLUR Warriors chapter, explained that the intention behind PLUR Warriors resonated so deeply with her, she “had to get involved.” Jessica Rivera, also from Tampa, discussed the impact hosting has had on her. “I’m a very shy and introverted individual so this has given me the freedom to express myself and be myself without judgement, all the while meeting and connecting with beautiful individuals.”

Randy “Plurendipity” Sloan is an ambassador for the Portland Kandi Picnic. For him, hosting the picnic is about bringing the community together while also giving back to local non-profits such as the Oregon Food Bank. “It’s important to show the practice of PLUR beyond our events and amongst ourselves. It’s so much more than raving and it’s nice to show this publicly.”

PLUR Warriors Kandi Picnics have been held in Miami, Tampa, Northern California, Southern California, Chicago, New York City, and Detroit. “At each picnic, I look around and get chills – the energy between us is all so beautiful,” said DiGiorgio. “People have thanked me for organizing the picnic and bringing people together, but I thank them for coming and humbly say it’s my pleasure.”

Portland’s Kandi Picnic will be held on the afternoon of September 13 at Colonel Summers Park. Anyone in the area is welcome to attend and no registration is required. You can find out more about the Portland Kandi Picnic through the Facebook page.

In this article:kandi, kandi picnic, plur warriors, Portland
Up Next:

Burning Man DJ, Crazy Daylight, Puts On A Performance To Remember In Olympia