For weeks the dance music community speculated the changes coming to the Electric Daisy Carnival. Would it take place over two weekends? Will it still be held during Father’s Day? Will it stay in Vegas? Well, it’s time to put the rumors to rest because EDC Las Vegas 2018 has been officially announced and, yes, there are BIG changes coming to arguably the biggest EDM festival in North America. Here’s what you need to know:

Previously held in late June, EDC Vegas 201818 will take place a month earlier, running from Friday, May 18th to Sunday, May 20th. It will NOT be split into two weekends, as rumored. Moving to May will offer festival-goers a welcomed relief from the intense Vegas June heat. Looking at the temperatures in Vegas during May 18-20th in Summer 2017, 56 degrees was the low average and the high average was 93 (Source: Accuweather). So once the sun sets during EDC ’18, expect a noticeable cool down!

The Introduction of Camping

For the first time in its 22-year history, EDC will offer a fully immersive camping program. In an area situated next to the speedway, you’ll have an opportunity to rent air conditioned general admission or VIP tents, complete with dust-control canvas walls, comfy artificial grass, power outlets, and more.

“At the center of the campgrounds, fans can enjoy plenty of shade, seating, water, food and beverage vendors, a general store, activities and more. A neighboring area will allow for the creation of Sound Camps where Headliners can build out their own themed environments.” –Insomniac Events

RV rentals will also be available, “complete with linens and pillows provided by Insomniac.” Have access to an RV already? Drive it on down and you’ll be able to hook it up to a pre-arranged power unit. Food, shade, water, daily activities and other amenities will also be on-site at the campground as well. Stay tuned for more information on exact pricing! 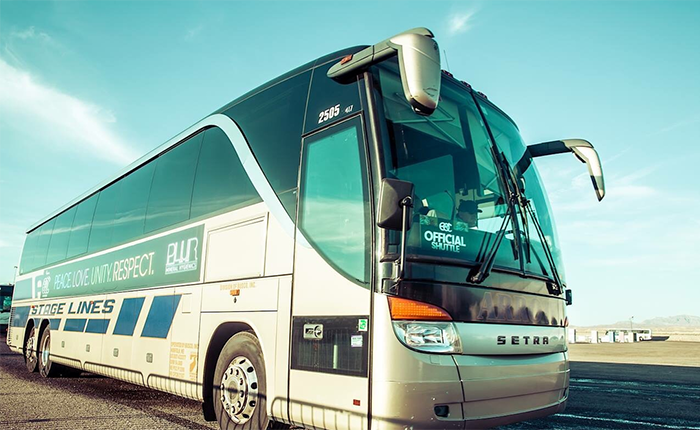 One of the many shuttles at EDC 2017 | Photo Credit: Insomniac.com

EDC shuttle system has often received a good deal of negative criticism, prompting Insomniac to make some major changes. Next year, the minds behind EDC will turn their shuttle program over to an independent team, that operates some of the biggest sporting and music events in America. With the addition of camping, and the anticipated completion of the expanded 15-Freeway, traffic flow for buses and personal vehicles stand to run considerably smoother compared to years past. Shuttle pricing and pick-up locations, will be announced at a later time.

The Party Will Begin Before Gates Open

Before gates officially open on each night, the Cosmic Meadow lawn will play host to opening ceremonies, “giving fans a chance to catch extended sets and cool down before the festivities begin.”

Tickets go on sale Thursday, September 28th at 12 PM PST. Early Owl three-day general admission passes start at $325+ fees, and three-day VIP starting at $699+. Expanded ticket tiers will be available, as well as affordable layaway options. Will you be joining us under the Electric Sky?

In this article:EDC, Electric Daisy Carnival, Insomniac
Up Next:

Monster Energy Could Bring Alan Walker to Your College Campus