Baserock's Subwoofer Backpack is the Tauntaun of Dance Music
Advertisement A long time ago in a galaxy far, far away on the remote ice planet of Hoth, two best friends were caught in a terrible conundrum. Luke, having just narrowly escaped the cave of the ravenous Wampa, now faced the deadly cold and harsh winds of night time on Hoth. His BFF, Han, in an act regarded as borderline suicidal by some, would ride into the night to save him. Han would race to find Luke, face down in the snow, weakened by hours of exposure and nearly dead.

[pullquote align=”right”] “And I thought they smelled bad on the outside!” –Han Solo[/pullquote]With barely a moment’s hesitation, and fearing for the life of his friend, Han used Luke’s lightsaber to cut open his newly fallen Tauntaun. He pushed Luke into it’s warm stomach while delivering this now infamous line to no one in particular

He was of course, talking about the trusty Tauntaun, a tall riding-lizard known for its strength, its winter heartiness, and for its many many odor secreting glands.

Imagine your favorite song as a majestic Tauntaun, freshly fallen from over playing. Would you step inside it and experience anew what you may have only known externally for years? Would you crawl into it’s pungent depths? Jared Becker and Gannon Daynes are hoping you will, as they start a long awaited Kickstarter campaign to fund their bass frequency back packs.

The Baserock backpack uses an ambient audio sensor and large bass speakers (pointed at your spine) to vibrate your body in perfect time and pitch with the music around you. It has an 8-hour rechargeable battery, and even a 2-liter reservoir to hold your drink while you rage inside your favorite song.

The Baserock Backpack Kickstarter runs until July 27th. Check back with us soon here at DMNW. We’ll be getting our hands on a pre-release version of one of these suckers and we’ll be sure to let you know how it goes. In this article:Baserock, Bass Music, Festival Backpacks
Up Next: 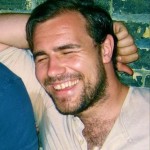