Bass Canyon 2021 was beyond worth the wait (DMNW Review)
Advertisement 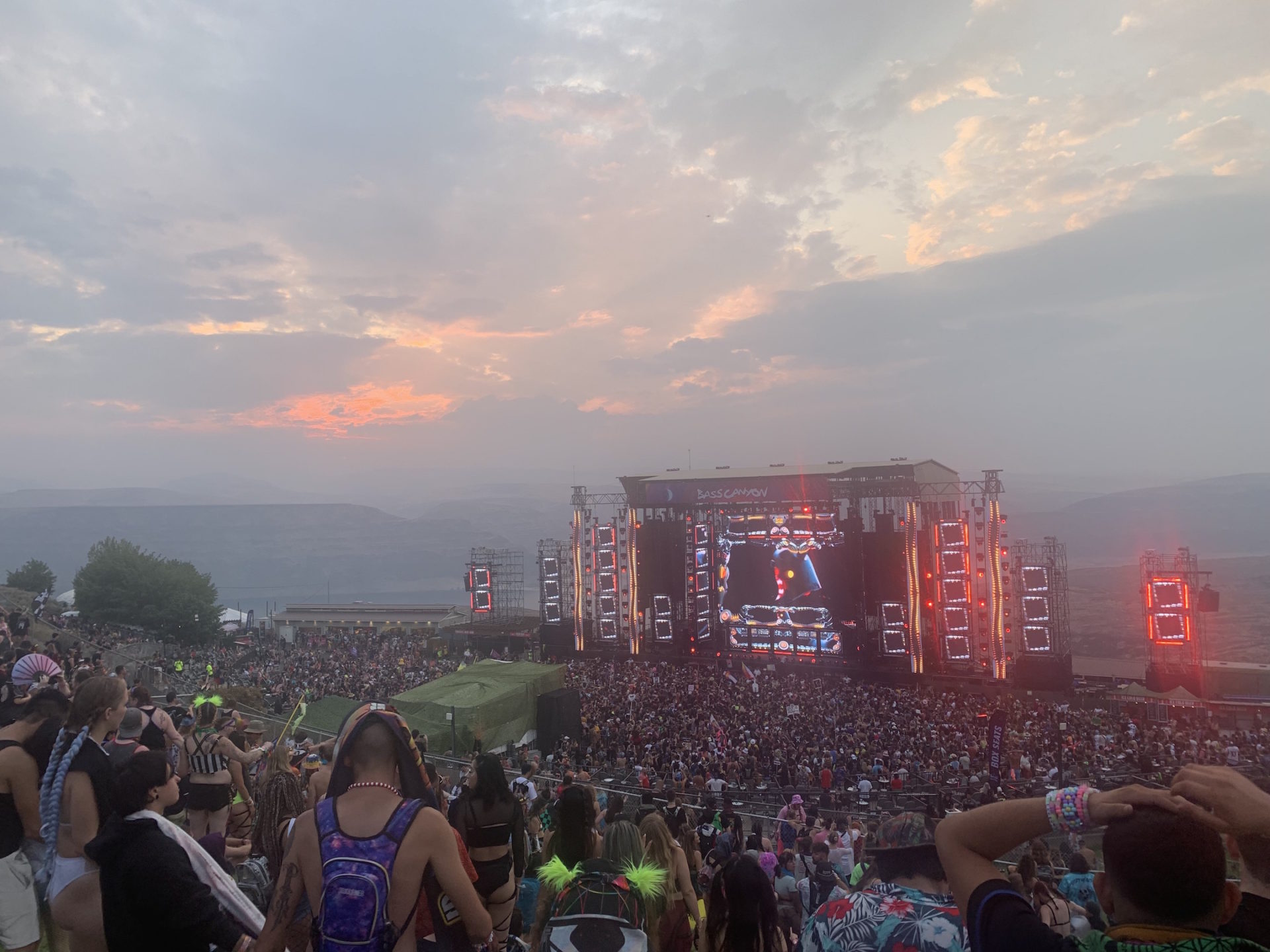 Did you make it out to the Gorge last weekend for the return of Bass Canyon? The three day festival hosted by Excision at the PNW’s most iconic venue attracted over 20,000 attendees and signified the first dance music festival at the Gorge since the COVID-19 outbreak in late 2019. Relive the weekend or catch up on what it was like in the DMNW review below.

We arrived following the scenic drive from Portland to the Gorge on Thursday in the early afternoon. Roads during the four-hour-long drive were blanketed in wildfire smoke, which made for some nervous anticipation of the conditions in Central Washington. Thankfully, the haze lifted considerably by the time we pulled into the vehicle security lines to wait.

Joined by hundreds of others squeezing into the campgrounds a day early, we waited for about three hours to get to our campsite. Although the wait was tedious, the sun was shining, and spirits were high as the grid of cars blasted bass music. As our row of about 30 cars began moving, attendants scanned camping passes. A separate attendant checked IDs and matched them against negative COVID-19 tests or proof of vaccination.

It seems like we hit a sweet spot for arrival time to the Gorge. Nearly 600 people who held tickets to the Thursday Pre-Party missed the event due to long security lines. After frustrated exchanges on Twitter, the festival promised refunds to all Pre-Party ticket holders who missed the special back-to-back set.

It’s unfortunate so many people missed out on the Thursday night show held at the upper hilltop stage. From the minute they announced the 15-plus artists who would be playing the special b2b set, it was clear that it would be a performance to remember. Over the following five hours, some of the biggest DJs from the lineup passed the baton back and forth on stage. Sullivan King, Space Laces, Excision, and Dion Timmer were among the list of artists to take over the decks.

The crowd of several hundred seemed to all enjoy the straight shot of bass music as a warm up for the weekend to come. It was also a great opportunity to pick up wristbands from will call and stop by the merchandise booth that took up several tents. All in all, the pre-party was worth the extra cost and set a great tone for Bass Canyon.

Bass Canyon fam, day 1 doors are OPEN!!! We are so excited for the weekend, we have a lot of fantastic things in store. Grab your crew & a smile and LET'S GOOO! pic.twitter.com/hgqATaDZ8B

Vendors, silent disco, and campgrounds made for the full Gorge experience

The pre-party the night before may have been dreamy, but sleeping in the GA campground was anything but. We leaned into the camaraderie of neighbors playing music until sunrise, as lost souls wandered through campsites in search of somewhere to dance. It might have been less than glamorous, but it captured the authentic Gorge feeling we missed for the last 18 months.

Vendors in the center of the campground decorated the grounds with psychedelic art, clothing, and much more. Food trucks also provided late-night snacks to campers, including the universally life-sustaining chicken tender combo. Next to the vendors also housed a large pavilion tent with the silent disco held every day, all day.

Although we anticipate minimal sleep camping and odd weather in the PNW, this year’s Bass Canyon threw in some extra curveballs. There were rumors of showers early on in the weekend, but the first full day amounted to little more than a sprinkle. By the second day, the rain came out swinging.

For a solid hour or two, the rain fell and PNW natives kept dancing while others found refuge in covered areas. But the feeling turned sour as we realized we forgot to reattach a tent rain fly before leaving camp that morning. We have no complaints about arriving for the first sets each day, but it was great to have neighbors that dragged all of our tents to safety.

If the rain wasn’t a lesson to secure your campsite on Saturday, the wind of Sunday doubled down on it. In the late afternoon, a high wind advisory shut down all of the stages for about an hour and a half. Amidst the chaos, the local stage tucked into the hillside saw an influx of hundreds but was eventually forced to close as well. Speakers that hung from the posts along the main walkway swung from side to side in the wind. Venue security scrambled to clear areas of the hill within a certain radius of the speakers.

It seemed possible that the remainder of the final day of Bass Canyon could be cancelled. While a mass exodus journeyed back to the campgrounds for the now-permitted re-entry in GA, our group flocked to the sole food vendor that was still playing music over their loudspeakers and danced around a standing table.

Maybe it was just another chance turn in the weather or maybe it was the magic of our group seance, but after about 90 minutes word spread that Bass Canyon was back on. The pit filled up with incredible speed as the last of the venue workers clung to harnesses reattaching speaker and lighting cables. Rather than cancel artists, the festival was extended from midnight to 1am and most sets were shortened to 35-40 minutes.

Best sets of the weekend: Excision, Blanke, Subtronics, and more

Throughout the weekend, there didn’t seem to be a set that the crowd didn’t enjoy. Chalk it up to the venue, the thousands of bass music fans, or Bass Canyon’s return to the Gorge.

But even last minute schedule changes on Sunday couldn’t throw off the impeccable roster of artists. LSDream, Blanke, Subtronics, and SLANDER all took the shortened set times in stride and delivered mind-blowing performances in spite. Just before handing over the decks to Excision and Illenium, SLANDER closed out with their emotional unreleased track, Walk on Water, featuring vocalists Dylan Matthew and RORY.

Space Laces also played out an unreleased track during his sunset set: the surprise debut of his collab with Skrillex. Some of our other favorites from over the weekend were Liquid Stranger, Eptic, SVDDEN DEATH, Wooli B2B & Dion Timmer, and Zeke Beats before it was cut due to wind.

.@svddendeath had us under a spell last night 🔥🪄 that was insane!! pic.twitter.com/5oAq6UEB4A

Expectedly, all three of Excision’s sets were phenomenal. Complete with pyrotechnics, lasers, and fireworks, the production of his sets were top tier. He also played out plenty of unreleased tracks and songs released on his Subsidia label created in 2020. When Illenium joined him on stage to close out the festival, the entire venue was captivated with their mashup of Power by Kanye and their track Feel Something with I Prevail.

Could not have asked for a better ending to the night! Thank you @BassCanyon fam and thank you @ILLENIUM 🔥 pic.twitter.com/RfN2QwqEoC

Medical staff kept busy over the weekend and after

No matter what festival you’re at, emergency medical intervention is an often unfortunate reality. This year’s Bass Canyon was no exception, and could have been exacerbated by its year-long hiatus. It’s also worth noting that medical booths were only located in the venue, and there was little to no security or medical staff located in the campgrounds. Despite a significant presence of venue on-site EMS providers, there were at least a handful of Life Flight helicopter evacuations over the weekend.

Apart from the cases of medical intervention required during the festival, COVID-19 cases after the festival have also been a grim reality. While there’s no way to confirm with certainty that anyone was infected at the event, the possibility remains for attendees. Although there was a proof of vaccination or negative COVID-19 test put in place for entry, no social distancing or mask protocols were enacted.

The third Bass Canyon will be one to remember

It seemed like the significance of its return wasn’t lost on anyone in attendance, including the artists. At the end of his set, Eptic gave a heartfelt speech about the toll of isolation. During some of the sporadic emotional songs over the weekend, you could feel the release of the same frustrations we’ve all felt to some degree. We may have shed some tears too, but that’s neither here nor there.

Even with some of the difficulties Bass Canyon faced, it still proved to be a joyous weekend full of bass. We reunited with old friends and welcomed new ones. No matter where you were, welcoming strangers were always around to dance with. It may have been a sleepy ride back home the morning after, but it was well worth it. Thanks to Excision and the crews that worked tirelessly, Bass Canyon 2021 will be one to remember for a lifetime.

In this article:Bass Canyon, Excision, Featured, The Gorge Amphitheatre

Written By The News Team