The 2021 Ultimate Artist Guide: Beyond Wonderland at The Gorge
Advertisement Though it won’t be the first dance music festival at the Gorge in 2021, Beyond Wonderland’s debut at the greatest venue in the Northwest marks a major moment in the genre’s long-awaited return.

There are many reasons that’s the case. The one we’re focusing on today is the most fun: the lineup. With this year’s iteration featuring 46 of the artists that were announced for last year’s canceled event, Beyond Wonderland 2021 still comes with a few additions and changes.

The 2021 lineup features 66 artists in total, one less than the 2020 lineup. While artists like Adventure Club b2b Snails, Alesso, and Zomboy didn’t make the jump, the festival has added Alison Wonderland, Benny Benassi, Dr. Fresch, and a mystery artist in their place.

With that many artists, it’s easy to get lost in the lineup. That’s why we’re bringing back our stage-by-stage artist guide. We pull together background info, music links, and more from each of the artists on the Beyond Wonderland lineup, giving you an easy way to get familiar with the acts we’ll be enjoying at the Gorge this October.

Note: We categorize artists by high-level genres to help readers of all kinds understand the lineup. We apologize for the inevitable miscategorization of your favorite prog/psy/electro/hardstep artist. We’re @dancemusicnw on Twitter. 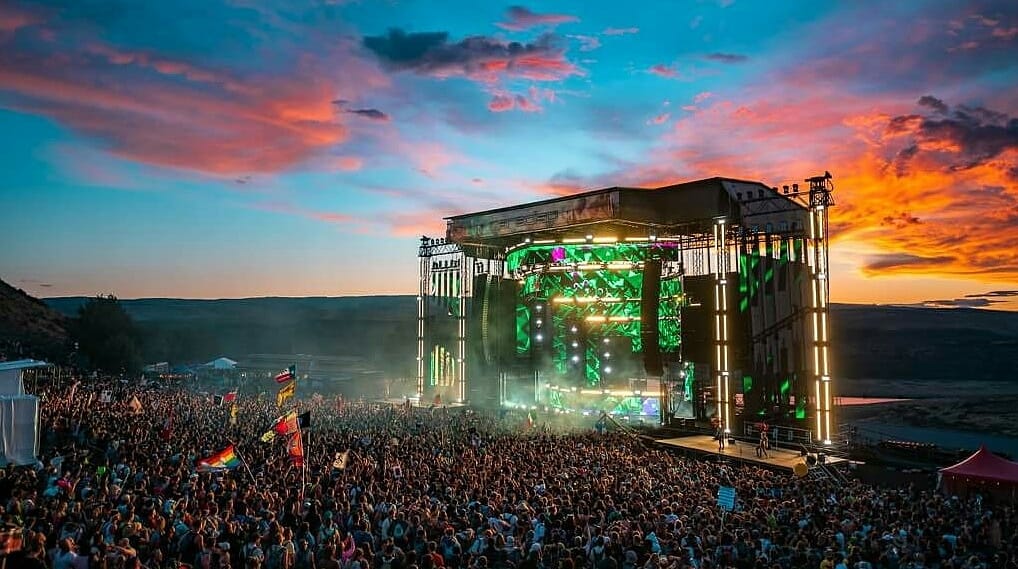 Beyond Wonderland Artists by Stage

A veteran of the Gorge after performing at multiple Paradiso Festivals in the past, 3LAU provides a blend of fun sing-a-longs and high-energy bass that any fan of dance music can enjoy. His 3LAU HAUS mix series has been a favorite of fans for years, and given his past performances at not only Paradiso (2013, 2015), but FreakNight (2016) and Lucky (2014, 2019), it’s safe to say he’s a Northwest favorite as well.

Reaching heights that many artists only dream about before he’d hit the age of 20, Alan Walker continues to be one of the bright young stars leading the way for the future of dance music. At 23, he has headlined several tours, released an album, and has one of the most impressive runs of releases in the industry. Plus, he’s homies with Hans Zimmer.


Consistently putting on incredibly fun performances, Alison Wonderland’s return to the Gorge couldn’t come at a better time. We obviously love the music, but the fact that she’s also outspoken on mental health makes us appreciate the Aussie even more. Recently profiled in the documentary Underplayed, Alison Wonderland is among the most important voices in dance music today.

Another returning artist who performed at Paradiso 2019 a couple of years ago, ARMNHMR has been consistently releasing tunes throughout the last year-plus. The California-based duo, made up of Joseph Chung and Joseph Abella, were also regulars at the Insomniac Virtual Rave-A-Thon series at the beginning of quarantine in 2020. While keeping busy has been great, getting back on stage in front of fans is what ARMNHMR is all about, and getting to enjoy their brand of melodic dubstep at the Gorge is a treat every bass head can appreciate. They’ll also be performing at Lost Lands 2021 in September.

Benny Benassi performing in the PNW during festival season is one of the true signals that things are getting back to some level of normal. The legendary Italian producer/DJ has consistently performed in our corner of the continent for years, and we wouldn’t have it any other way. You know the hits, you know the remixes, and you know you’ll be singing along to all of them at the Gorge this fall.

Delivering the dubstep at Beyond Wonderland at the Gorge, Blunts & Blondes knows how to give the fans what they want. Also known as Michael Guard, the Tampa-native began his journey as a teen, and has watched his career blossom well into his 20s. He’s performed at the Gorge before, at Bass Canyon in 2019, and we have zero doubt that returning after the last 18-months will be something special.

Speaking of singing along, The Chainsmokers are going to take over the main stage at the Gorge this fall. Alex Pall and Drew Taggart successfully made the jump to the mainstream, and are among the true superstars of EDM. They’ve performed at major festivals all over the world, worked with the biggest names in music, headlined several tours, and will likely be among the most attended sets at Beyond Wonderland at the Gorge this fall.

It wouldn’t be festival season at the Gorge without Northwest favorite DARRIUS taking the stage at some point. A New Orleans-native, but an adopted Seattleite, DARRIUS, aka Darrius Washington, is an all-time PNW great in the dance music scene. Playing everything from house to techno to electro and more, DARRIUS’ ability to blend genres and consistently find the perfect vibe for any type of performance is what sets him apart. While he’s no stranger to the Gorge, we’ll also never forget the time he helped save the day at Resolution 2014 when Above & Beyond were unable to make the show. Moments like that, along with countless other smaller, but still very important moments, are why the PNW has fallen in love with DARRIUS and won’t be missing his set at Beyond Wonderland.

Another European artist making the trek to the Gorge this fall, Frenchman Dustycloud is following the path forged by compatriots Tchami, Malaa, Snake, Mercer, and more. The Insomniac Records regular has also featured on Ultra Records, OWSLA, and more, and is consistently making waves with his quality releases. His three-track Fate EP was released via Insomniac Records last year, highlighting his infectiously bouncy bass house sound.

Returning to the Gorge following a performance at Paradiso 2017, JOYRYDE has been following his passions both in and out of the music industry for years. No stranger to taking the stage and controlling a crowd at a major festival, JOYRYDE (aka John Ford) has also managed to find the time to work in fashion, production design, and more. His debut studio album, Brave, was released via HARD Recs in April of last year. Now that festivals are back, the former member of dance music duo Lets Be Friends is ready to share those new tunes with us in person.

When an artist like Ekali brings you on his tour, it’s a good thing. When an artist like RL Grime wants to collaborate with you, that’s a good thing, too. Those signs, and many more, have everyone excited about Juelz, who toured with Ekali in 2016, released a tune with RL Grime last year, and was featured on Diplo & Friends earlier this year. The Vancouver-based artist is one of the rising stars in trap/hip-hop, and his inclusion on the Beyond Wonderland at the Gorge lineup has us as excited for the next phase of his career.

Kaivon is another Los Angeles-based artist making the trek north for Beyond Wonderland at the Gorge, adding to his impressive list of festival performances throughout his still-young career. Releasing his first track in 2016, and headlining his first tour a few years later, Kaivon is an artist clearly on the rise. He’s showing no signs of slowing down this year, with trips to Lost Lands, Spring Awakening, and EDC – Las Vegas on the docket in 2021.

Formed in Ontario, Canada, Los Angeles-based duo Andrew Fedyk and Joe Depace had their Armada Music debut release in the fall of 2017. Several years later, they’ll be performing at one of the most beautiful venues on the planet. They’ll likely play that Armada release, Body, which now boasts more than 17 million plays on SoundCloud. No stranger to major festivals, Loud Luxury fits right in at Beyond Wonderland at the Gorge 2021.


REZZ is a superstar. One of the biggest acts on any lineup she’s featured on, the 26-year-old Canadian has steadily risen through the ranks of dance music throughout her career. Since making her way on OWSLA and Mau5trap, REZZ has managed to perform at the likes of the Gorge, Red Rocks, and more. The fan-favorite has also been featured in documentaries, had her hand in comic books, and toured through the Northwest time and time again. With dance music festivals returning to the Gorge, getting some of the dark, heavy, techy-bass REZZ provides is the perfect way for fans to welcome the genre back in 2021.

DJ and producer Rohry, aka Andrew Rohrbach, has been a staple in the Seattle dance music community for a while now. Performing regularly at the likes of Foundation, Kremwerk, and more, Rohry has proven his ability to put on a show regardless of the genre he’s playing. In addition to his work at local clubs, the Seattle-native has also performed at festivals like Bumbershoot and Resolution. Now, we’ll get to enjoy his return to the Gorge, following his set from Paradiso 2017 a few years ago. Rohry also performed at Bass Canyon 2021 at the Local Stage this year.

Colorado’s Trevor Christensen, also known as Said The Sky, has turned his classical instrumental background into some of the most enjoyable melodic bass in the business. Every good festival has some fan-friendly melodic bass, and Said The Sky’s brand of music couldn’t be more perfect for a setting like the Gorge. Savvy bass fans will likely make Said The Sky’s set one of the most attended of the weekend.

Another huge name that both newer and older dance music fans can appreciate, Dim Mak Records boss Steve Aoki makes his Northwest return at the Gorge this fall. Able to combine an ability to create a crazy party atmosphere on stage, while being one of the most influential artists in the industry behind the scenes, Steve Aoki has utilized his mainstream appeal to push the genre to greater heights.

Dance music legend. Global superstar. One of the first artists that come to mind when EDM is brought up in pop culture. Regular at the Gorge. All of these things describe Tiësto. He’s earned awards from nearly every dance music group giving them out, and even has a Grammy Award. The Dutchman’s list of accomplishments, like being the first DJ to perform on stage at the Olympics in 2004, is nearly as long as his list of awards. He’s undeniably helped shape dance music into what it is today, and will continue to shape its future.

Watching the consistent rise of Vancouver’s WHIPPED CREAM throughout the last few years has been a blast. Also known as Caroline Cecil, the now Los Angeles-based artist is showing no signs of slowing down anytime soon. She’s shared her unique blend of bass and hip-hop on grand festival stages at Shambhala, Holy Ship!, Lost Lands, Lollapalooza, and countless others. She’s a certified “can’t miss set” no matter where she’s playing, and that is absolutely the case when it comes to her performing at the Gorge this fall.

With releases on the likes of OWSLA, Fools Gold, Mad Decent, SPINNIN’, HARD, and more, Wuki clearly has the attention of tastemakers and fans alike. Putting him in the “Bass” section fits, but Wuki has produced and played everything from trap and electro to hardcore and hip-hop. Be prepared for a high-energy set from Wuki that’s as fun as it is diverse.

Another artist who isn’t a fan of genres (in a good way), bass-centric Yultron’s journey through music has resulted in a broad range of fun sets and tunes. Based in Los Angeles, Yultron has experience in classical music, rock, and hip-hop, providing a varied base for his brand of dance music. He’s worked with the likes of REZZ, Kayzo, and Zeds Dead, earning the respect and admiration of fans and fellow artists alike.