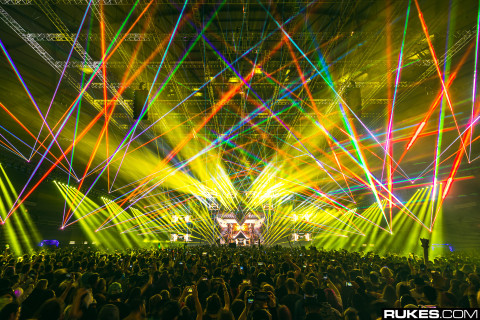 Get ready, headbangers! Excision is bringing the bass back to the PNW with his massive two-day Thunderdome show on February 4th and 5th, 2022. The Excision-produced show will return to the Tacoma Dome for its fourth installment promising a stacked roster of artists, insane production, and no shortage of bass.

Get ready for this year by watching the 2020 Thunderdome stream

For many bassheads in the PNW, Thunderdome 2020 was the last large-scale event before the pandemic began. It was an unforgettable two-day show with almost entirely back-to-back sets and elaborate production that Excision-produced events have a reputation for.

Following the announcement of Thunderdome’s return, Excision also released a video of his 2020 set with audience footage. Whether you want to relive the show or get excited for this year’s, Excision’s team has created just the thing for you.

Each previous Thunderdome, the dubstep kingpin’s brought along a mass of talent and back-to-back sets. This year’s no exception as some of our favorites will be taking the stage. Bass music’s up-and-coming talent include Ray Volpe and Vampa, which are sure to be excellent sets to watch. Excision’s also assembled some of the biggest on the scene including Liquid Stranger Eptic, ATLiens, and Bear Grillz.

Apart from the standalone artists, some spectacular duos will rattle the PNW. Yookie and Calcium, Dion Timmer and Kompany, and Riot Ten and Blunts & Blondes light up the lineup as fantastic back to back additions.

At the end of both nights, Excision himself will take over to close out. Fresh off of his fifth full-length album and a commitment to showcase the freshest bass music in the scene, it’s a fair wager that both sets will be unheard of.

Once again this year, Thunderdome will be held at the Tacoma Dome. To find tickets, visit Excision’s website. Although both days’ lineups are stacked, you can find single or two-day passes.

In addition, you can also opt for an express entry pass on either day. In 2020, entry lines on the first day were so long that many hitting Seattle traffic after work waited for hours. Avoid this by grabbing express entry or planning to arrive early.

Get ready to rumble with Excision at Thunderdome this year

Have you been missing some heavy bass music in your life lately? If so, Thunderdome 2022 will be one you won’t want to miss. Time and time again, we’re impressed with the dubstep legend’s PNW shows and can’t wait to see you February 4th and 5th at the Thunderdome.