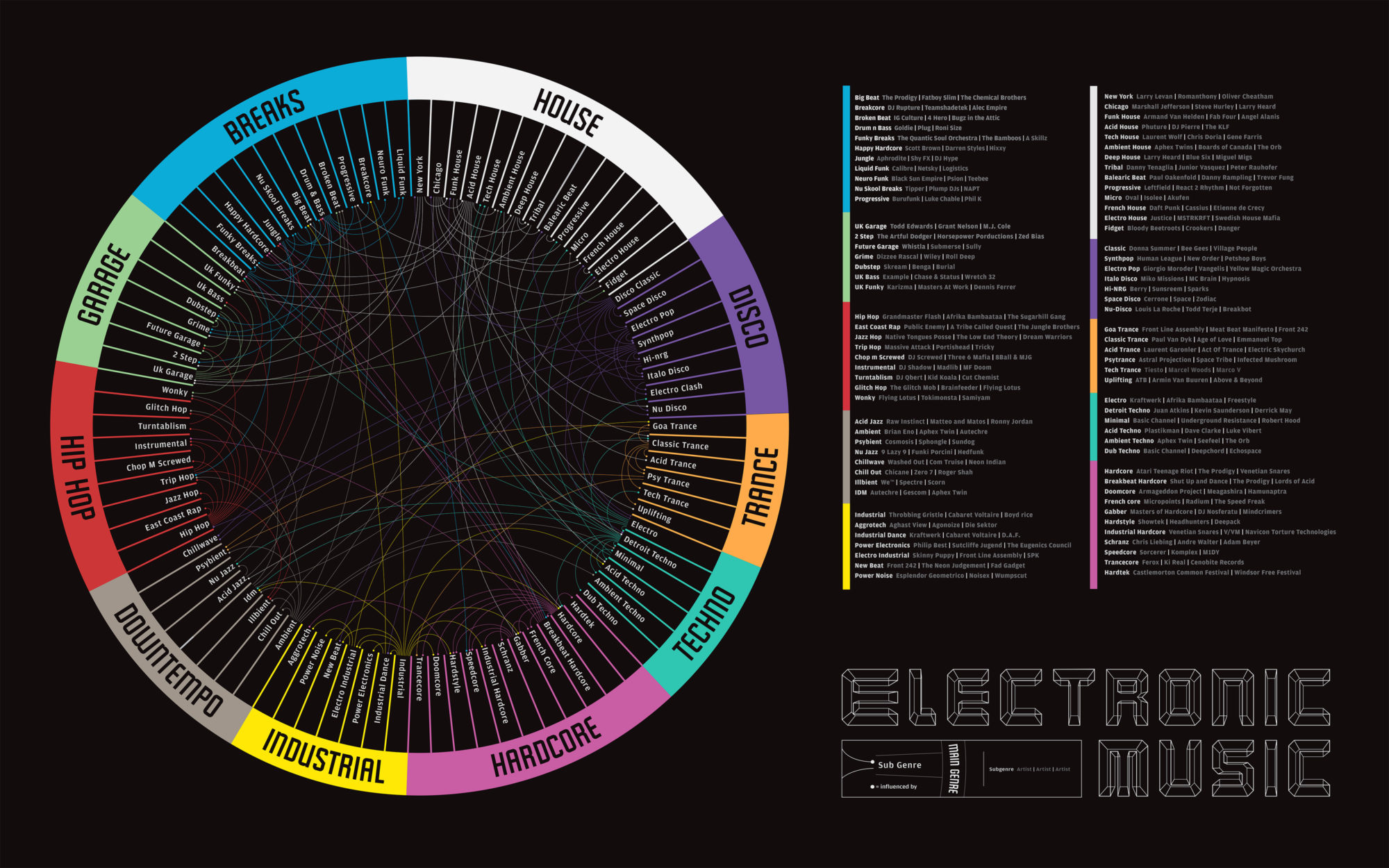 In this section, we focus on specific songs and albums that shaped particular genres in electronic music history. As electronic music began to gain momentum throughout the U.K, with house emerging as more mainstream club music, it still remained underground in the U.S. This caused many artists and fans in the underground scene to explore and expand the styles of electronic music. House and techno did not break into the United States mainstream until much later.

The term “techno” is popularized by Virgin Records, with their U.K. compilation Techno! The New Sound of Detroit. The album released in 1988, around the time techno began to garter mainstream attention in the U.K. It is challenging to pick only one artist to focus on related to techno, because there are varying artists that evolved the movement in the U.K. and the U.S.

One of the earliest pioneers to bring techno into the U.K. mainstream is Moby, with his 1990 track Go. The song quickly became a hit on the U.K. Top 10 chart, which gave Moby recognition as a key figure in the techno movement. Following the success of Go, a variety of artists ask Moby to remix their popular hits including Michael Jackson, Pet Shop Boys, Depeche Mode, Brian Eno, the B-52s, and Orbital. In 1996, he released the album Everything Is Wrong, which gains Moby critical acclaim and mainstream success in the U.S. Moby continues on to put out a few more albums in the 90s, like Play, which sold 9 million copies worldwide.

Jungle music evolved from hardcore in the early 90s. Earlier hardcore was raw, with many events taking place at an abandoned warehouse or a random field. Once hardcore emerged into the mainstream with tracks such as DJ Hype’s Trip to Trumpton and The Prodigy’s Charly, the aspect of its underground culture that people loved was missing.

Jungle remained within the umbrella of hardcore for a few years, many often confusing one with the other. From this, hardcore split apart into happy hardcore and jungle. Jungle focused on breakbeat and hip-hop undertones, but mixed almost everything from reggae and hardcore to house, techno, and dub. It wasn’t until about 1993 that jungle got it’s signature style, focusing more on the breakbeat and darker basslines. Origin Unknown, with Andy C and Ant Mile, released Valley of the Shadows in 1993, and as one more highly influential tracks of the early jungle days it makes Andy C’s currently staple in the modern DnB scene only fitting.

DnB later evolved out of this jungle style. It remained similar in a lot of ways, but DnB focuses more on the melody and basslines, with a set rhytmic beat. In 1995, DnB became more commercialized with Goldie and his album Timeless. The album sold 250,000 copies. For many, Goldie’s album represented the rebellion of societal standards, and the DnB style as a whole also reflected as such. Goldie went on to create his own label Metalheadz, which became a home for various DnB greats.

Trip-Hop emerged as American hip-hop was gaining momentum in the U.K.  The genre initiated in Bristol, England, as electronic music artists were trying to experiment with hip-hop and house. Some perceive Coldcut’s remix of Eric B. & Rakim’s Paid in Full as one of the first trip-hop songs, but it was not until shortly afterwards that Massive Attacks album Blue Lines paves the way for the trip-hop movement. The track Unfinished Sympathy, plus the album itself, are frequently considered the best tracks of all time. Other trip-hop pioneers, such as Portishead and Tricky all reflect similar styles. The three groups collaborated on a variety of production and tracks throughout the years.

In this article:Classic, Electronic Music, history