Infected Mushroom: A Rock Rave Experience Like No Other (Exclusive Interview)
Advertisement 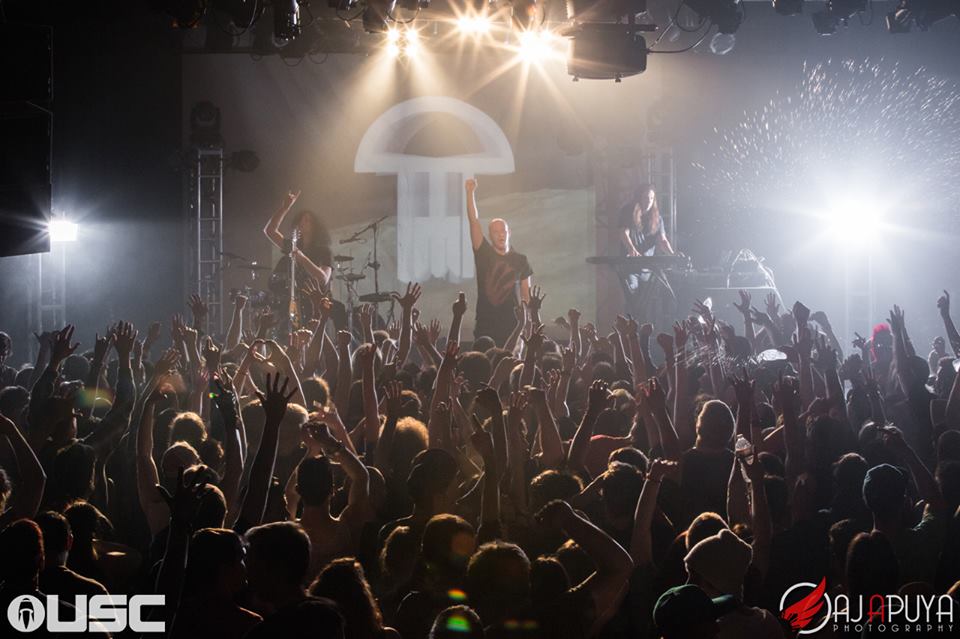 The second you set foot into the Showbox Market for Infected Mushroom’s third Seattle appearance inside of a year, it was immediately clear that this wasn’t your typical show. Dressed-to-the-nines patrons present at any number of club nights were replaced by a crowd with everyone from metal-heads to ravers. Hula hoops, LEDs, and outlandishly cool outfits made up the demographic, something you can bet the men of Infected Mushroom Erez Eisen and Amit Duvdevani, wouldn’t have any other way.

Their diverse sound has seen them land in Seattle three times with three different set-ups: The spheres, the live DJ set, and something even crazier than the first two. This time around, a live band took the stage for what they lovingly dub a “rock show rave.” That mentality shined through in the white-hot energy they possess to rival that of any rock star, with none of the downside of the less-than-maintainable lifestyle: “We’re more rock kind of oriented on stage, but when we go back I’m married and shit.” Seeing the energy of the live band up close and personal though, there’s really only one way to describe it. And go mental they did. (Photo Credit: AJ Apuya Photography)

Coming to a city that appreciates diversity more than most, their one-of-a-kind sound perfectly catered to a sold-out crowd head-banging to live drums, keyboard, guitar, and vocals. Even with the pressure of playing to a full house though, you’ll never catch the psy-trance duo ever taking things too seriously. Amit openly admits that “music is serious but we don’t take it seriously, for us it’s more fun. If you lose the fun of it, why fucking bother?”

As Amit handled the vocals (and hype-man duties to boot), Erez took over the mixing and keyboard to accompany the live instrumentals. Throughout their two hour set they cycled through a veritable treasure trove of originals, covers, and remixes, making one thing abundantly clear: There’s nothing quite like the Infected Mushroom sound.

Let’s say me and Erez want to do say, a Skrillex song, eventually it’ll come out sounding like us. For us it’s easy to be different.

That signature style felt right at home here in Seattle, a part of a greater United States dance music scene with a collectively open mind that holds no equal. “What I like about the US, (at) let’s say a Freaknight show, they have dubstep, glitch hop, hard dance, electro, techno, house, and trance, all on the same stage, which is unheard of!” Amit and Erez paint a vivid picture of a European scene focused on single-genre stages that, while prevalent stateside, aren’t a set-in-stone requirement like they are for our overseas counterparts.

In Europe you have a definition where you play. If you’re on a hard dance stage, this is where you play, you don’t go play another stage. But here in the states, it’s such a mixture in a stage, that for us is cool. I never in my life thought Pretty Lights would sell arenas, but he does and that’s great! The U.S. is the most open-minded to many genres.

That open-mindedness showed up in spades on this particular night, as a willing crowd sang along to the high-octane cover of The Foo Fighters The Pretender (with Amit more than doing justice to Dave Grohl on the vocal side). Just as the night was winding down though, the band came out for an encore that blew the socks off of everyone in room. The unmistakable riff from a classic track blared through the sound system, and suddenly Infected Mushroom placed us smack dab in the middle of a brand new remix of The Beastie Boys’ Sabotage.

Always full of surprises, Amit and Erez felt it only appropriate to close out the night with a little bit of mid-90s teen nostalgia. “We finished it two days ago, it’s brand new, and we’ve been wanting to do this for years. This is us having fun and laughing our fucking ass off, because the whole Sabotage track is hilarious.” That fun-loving attitude translated to a crowd that had all their wildest expectations completely and utterly exceeded. From head-banging killer drum solos to reveling in shredding live guitar, it was a night of dance and rock music that you can only get from Infected Mushroom. Music may be serious, but for Seattle that night, we joined Amit, Erez, and the live band in one solitary goal: “Going mental.”

For more, check out our last interview with Infected Mushroom from Paradiso 2013 here!

In this article:Infected Mushroom, Live Band, Pretty Lights, Psy-Trance
Up Next:

Selfie Sunday: 15 Dillon Francis Selfies That Will Make You Fall In Love

What The Festival – Artist To Watch For: Robot Koch After prolific career, where has Pretty Lights gone? Mija Heads to Seattle With a Live Band