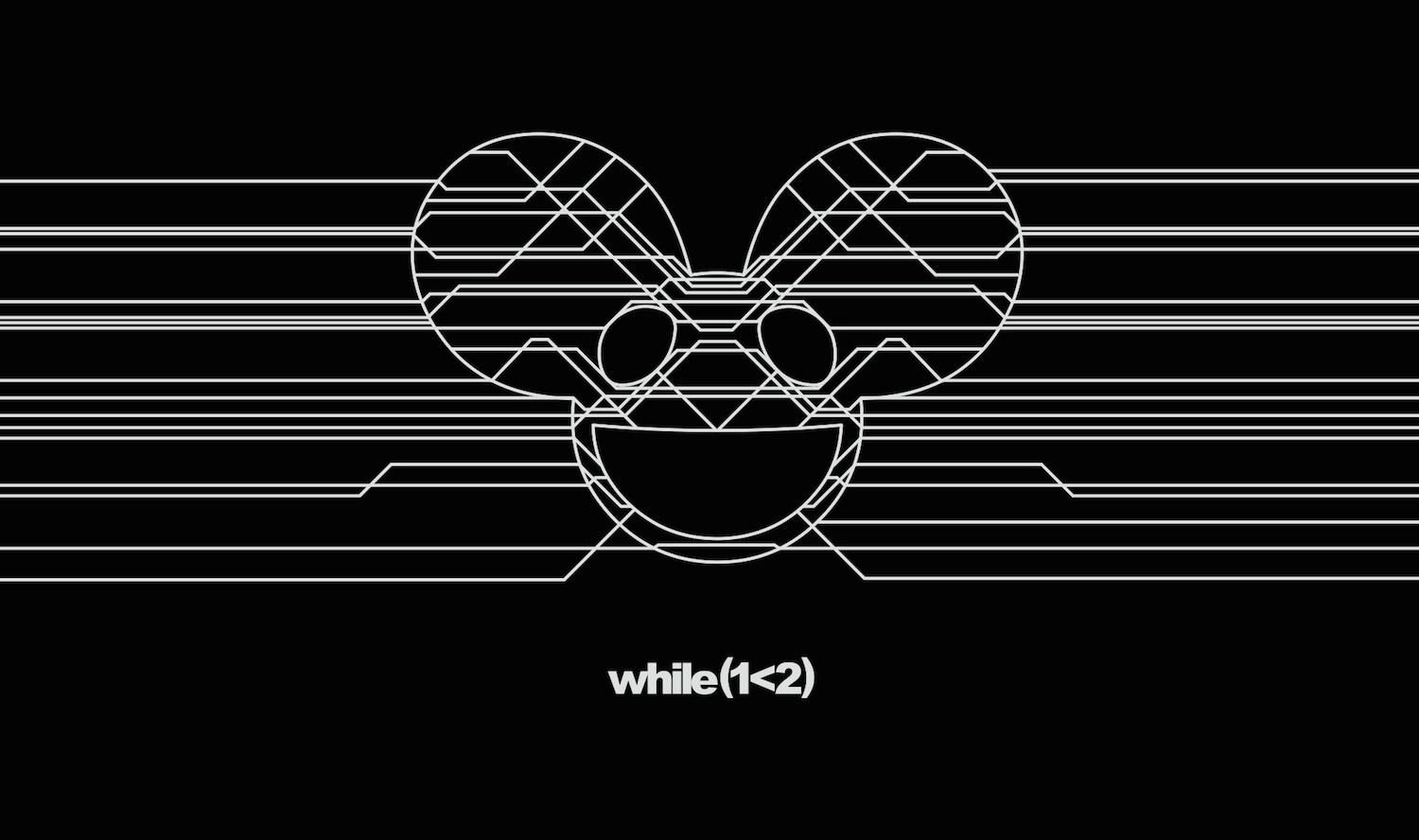 [dropcap size=small]T[/dropcap]hey say expectation informs reality. In the case of Deadmau5’s While(1<2), what we want to gain from listening to it will directly inform our perception of its greatness.

So we’ll be up front: if you’re expecting a mere fleshing out of the body of your average dance album, based upon the early releases, (Avaritia, Seeya, Infra Turbo Pigcart Racer, and Phantoms Can’t Hang), you’ll be sorely disappointed.

When we listen to something for the first time, we throw descriptive words and phrases at the wall. As we listen again and again, we find out what sticks and focus on those to deepen our understanding of the material. Let’s get one thing straight here: We love deadmau5 (aka Joel Zimmerman). But this album gives you a lot to throw at the wall. It’s moody. Dark. Sad. Lonely. Soothing. Slow. A Dreamscape. Jarring. Different. And this: Definitely not the tone of deadmau5’s festival sets. In short, While(1<2) is no grooving party. At least, not in its entirety. As a collection of songs, it is a jarring journey through a varied soundscape.

Zimmerman laid out his seventh album as a set of two discs containing 25 tracks (and if you purchase the album, you will receive a mixed version of each disc, which is awesome). In Joel’s own words, While(1<2) is “the first album I’ve ever done that I would even call an album… it’s put together like an album. not a compilation.” What this means in plain terms is that it was designed to be listened to as a whole. So the respectful DMNW crew that we are, we have reviewed the album as an album. We believe that in the case of While(1<2), as Aristotle once said, “The whole is greater than the sum of its parts.”

In the hour and twenty minutes that this album spans, you’ll experience both progressive and tech house, experimental electronica piano interludes, and a bizarre remix of Nine Inch Nails’ Survivalism. The variation in styles suggests a haunted and conflicted mastermind. With its unique approach in track composition and placement, While(1<2) is definitely deadmau5’s most thought-provoking work to-date. The palpable mood of sadness, loneliness and conflict is such that one imagines deadmau5 has tried to demonstrate how he would package it musically, and called it an album.

Deadmau5 is a production mastermind, which is evident from the opening moments of Avaritia. Infra Turbo Pigcart Racer, which builds slowly into a driving beat with the help of well-placed synths and rough-around-the-edges bass, is a quintessential example of deadmau5 sound. You’ll find Mercedes, the sister song to Infra Turbo Pigcart Racer on Disc 2, equally appealing. Throughout the album, Zimmerman reminds us that that he knows how to put sounds together, even when it is somewhat jarring. The Survivalism remix feels rough, but knowing deadmau5’s feel for sound, we have to conclude that even this is on purpose, down to every last fraction of a note.

Overall, the production is fantastic, imparting a distinct grit and toughness on the album that is characteristic of the mau5.

Of the 25 tracks on the album, there were only four that we felt would really stand on their own (radio singles, etc): Avaritia, Coelacanth I, Infra Turbo Pigcart Racer, and Phantoms Can’t Hang. The sounds in the songs clung to a structural model that provided cohesion of pace with generally a great sampling in variety.

A particularly beautiful song that wraps up the first disc, Gula, begins with slow notes on a piano, and the sensation of loneliness is so palpable you feel as if you could touch it. It is interrupted by heavy bass and brings back the synths we are familiar with from Avaritia. There is no doubt in our minds that deadmau5 carefully chose the tracks he released early, because the familiarity of those songs, placed as they are throughout the album, takes a deadmau5 from the known to the unknown like a well-planned adventure, which starts and ends in a safe place.

Considering the amount of ground covered on While(1<2), we are impressed at how things were held together. And when things weren’t, we listened. Trusting the intention behind the frequent mood changes, we are able to glean a chaotic and dark meaning from the collective murkiness of all of the songs in combination. The mixed versions of the discs are a much more smooth listen, although there are still some abrupt changes that listeners must experience. The NIN remix, Survivalism, definitely did not feel like it fit with the rest of the album. However, it was a good way for deadmau5 to step off the beaten path and try his hand at something that makes some listeners a little bit uncomfortable because it’s not cookie-cutter prog house or tech house.

[While (1<2) is] the first album I’ve ever done that i would even call an album… it’s put together like an album. not a compilation. – deadmau5

Deadmau5 gets some serious points here. As compared with his other albums and work of those in his genre(s), While(1<2) is a radical departure from the 10-14 track, measured tunes of similar stature. There is something incredibly personal and haunting in the unique mixture of tracks that one cannot ignore when listening to this album. In the sense that he came up with a different way to communicate his style and build up an album collection, we must give him serious kudos, for he stepped off the beaten path.

Dash Berlin Reworks All Of Me, Makes Beauty