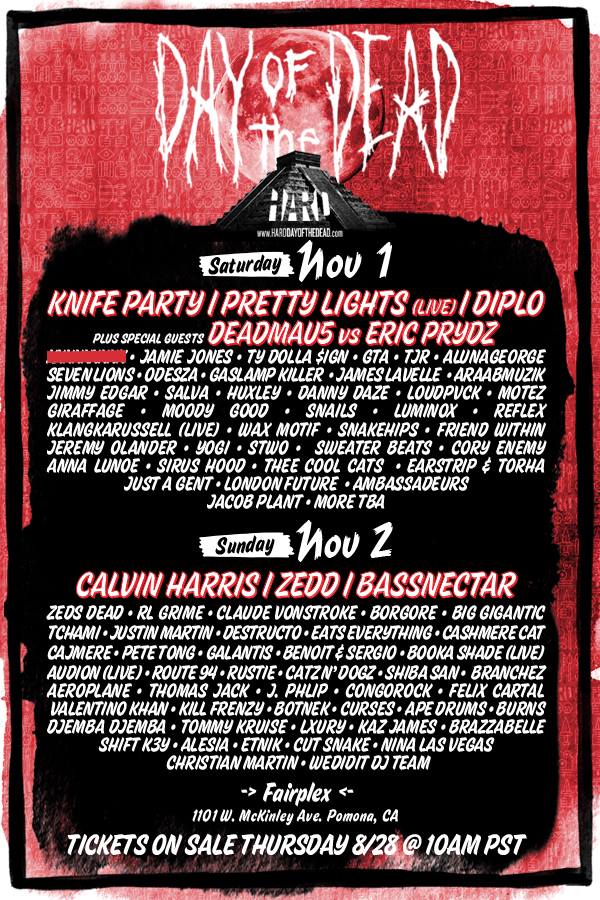 See anyone you're excited by on the lineup?

We’re lucky up here in the PNW to have a pretty epic rotation of artists who come through our venues, but hot damn HARD’s Day Of The Dead lineup announcement has us excited. Headliners include some of our favorites: Pretty Lights, Knife Party, Calvin Harris, Zedd, Diplo, and Bassnectar. The “supporting” acts aren’t anything to scoff at either, with such names as Zeds Dead, Galantis (who we hope leave Oct 31 open…), Booka Shade, and more.

HARD Day Of The Dead will actually take place over two days, occupying the Fairplex (formerly LA County Fairgrounds) in Pomona. California is lucky to be able to get use of their outdoor venues year-round. We aren’t sure yet what else will be part of the show, but HARD puts on some epic events, even if some of their policies leave a bit to be desired *coughkandibancough*. What do you think? Is the lineup enticing enough to make you want to trek down to SoCal?

See anyone you’re excited by on the lineup?

Tickets for HARD Day Of The Dead go on sale August 28th at 10 am PST for those of you who are interested in a California Halloween adventure.

In this article:Bassnectar, Calvin Harris, Diplo, Knife Party, Pretty Lights, Zedd
Up Next:

3 Reasons for Dance Music Fans to Check Out Bumbershoot 2014